THE BACKGROUND AND THEOLOGICAL MEANING OF CHRISTMAS. We will attempt to describe the historical development of the feast of Christmas, how and when it was introduced in the Church 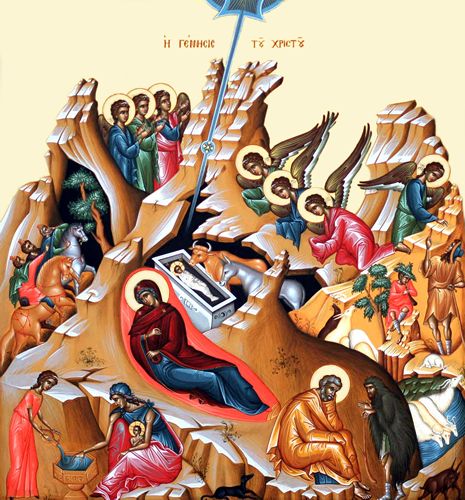 THE BACKGROUND AND THEOLOGICAL MEANING OF CHRISTMAS.

We will attempt to describe the historical development of the feast of Christmas, how and when it was introduced in the Church, what is its theological content and lastly, how Christians celebrate this great feast today.
For nearly the first three centuries of Christianity Christmas was not celebrated. We note from historical sources that an interest in determining the date of the Nativity of Christ begins in the 3rd century. Initially, the Church celebrated the feast of Christmas with the feast of the Epiphany on January the 6th. The oldest sermon on Christmas that exists today, was delivered by Saint Basil the Great in 376 AD, in which the feast was already separated from the feast day of Epiphany. The 25th day of December was established as the celebration of the anniversary day of the Nativity during the tenure of Pope Julius the First. Thus, Christmas has a Roman (Western) origin. It was established in the East much later, around the middle of the 4th century. St. John Chrysostom, in a speech that was probably delivered on December 25, 386 AD, urged the Church of Antioch to agree to December 25 as a day of celebration of the Nativity of our Lord. In the hitherto pagan world, December the 25th was the celebration of the great feast of Saturnalia in honor of the god Saturn and the pagan birth of the unconquerable sun.

In this way, Christians confirmed the prevalence of their faith against pagan beliefs and gave a whole new meaning to Christian celebrations, respecting the dignity and decency of the human person.

That there was no specific feast day for the nativity of Christ does not mean that Christians did not ascribe the theological significance that befits the birth of our Lord on earth and this is clear from the fact that all the Fathers of the Church theologized on the “Incarnation” and the birth of our Lord. Saint Gregory of Nyssa delivered a speech at the Nativity of the Saviour, in which the holy father says: “The present feast’s hypothesis is the mystery of the incarnation of the Son of God. In this incarnation the human body becomes the tabernacle (home) of Him who is clothed with human nature.” He continues to show the greatness of the event of the Birthday of our Lord, recalling the words of David: “This is the day that the Lord has made let us rejoice and be glad in it” and he notes that the feast of Christmas, which coincides with the longest night of the year, indicating the end of the evil darkness of sin and the rising of the sun of justice, the true light. “I am the light of the world: he that follows me shall not walk in darkness….” (John 8:12).

According to Saint Athanasius the Great, God assumes human nature to raise it to the level of God. He specifically stresses that in the understanding of the event the Nativity, the cave indicates the “unlit and underground life of man.” According to the great Alexandrian Author, it would not be possible for us to be led to the celebration of Easter, which is the “end of the ekonomia (dispensation)” of God.” Without the incarnation and birth we would not have had the Crucifixion nor the Resurrection. This means that we would not have salvation.

Another great and prolific Father of the Church St. John Damascene writes that the Lord became human and glorified the entire human nature.

Christ therefore with His incarnation assumed human nature and by His birth brought man to the height of His divinity, where it was before sin (original sin).

The redemptive work of Christ begins with His Incarnation and birth, and will end with His Crucifixion and His Resurrection. As for sinful human nature, with His birth He remains without sin. This is because His birth could not physically bear sin, because then how would He defeat sin and the consequences of sin – death? This means that when Christ assumed human nature he did not assume sin, because sin is subject to His voluntary judgement, so for Christ sin was not the result of natural consequence as it is for man. Christ as the Second Person of the Holy Trinity remains God and has assumed human nature: God-man. What we write is little, compared to what has been written by the holy Fathers of our Church to show how big and important the feast of the Nativity of Christ is in our lives.

But the question remains: How do Christians celebrate Christmas today? How does the world perceive the meaning of Christmas? We are all to a greater or lesser extent witnesses. We all know what Christmas means today.

It is with sadness that we see that people in our days are progressing gradually to the secularization of the feast – removing any spiritual meaning of this great feast of the Nativity of our Christ. Christmas is stripped of the great gift of God to man. He sent His only begotten Son to be born, crucified and risen for our salvation. Our global Christian world insists on removing the Mystery of the feast. In the past, a Christian would prepare for this celebration with a fourty day fast. Today, the feast is marked by the decoration of trees, the lights and balls and much more – like shopping, gifts and so on. Christmas Eve, instead of a night of prayer, devotion and preparation for the Divine Liturgy, transmutes into a night of revelry until dawn, wine drinking, gambling – into a night where we are not expecting Christ.

How many of us, Christians of today, have fasted, have prepared with repentance and confession for Holy Communion on Christmas Day?

We thoroughly waste all our time to prepare for all the events such as dinners, dances and other entertainment, and spend little or even no time for our soul, for going to church…. And this, despite the fact that in all Christian countries these days are holidays. These holidays started from Justinian in 529 AD to celebrate the feasts Christmas up to Theophany, but we lost the meaning of the holidays. As mentioned, the celebration of Christmas was first introduced as an ecclesiastical event into the Church of Rome, that is from the West and it is this most rational and humanistic West that today introduced this secularization of the feast in the Christian world.

Moreover, this secularization even threatens to disorient us as Greeks as it dilutes all our Greek and Orthodox traditions. The family has ceased to get together. It has stopped the celebration of Christmas as a family celebration – each member “feasts” in a different place. Television is of course, an integral part of this secularization of Christmas, because of the power of communication that it has and the “authority” of those who use it, who with what they say verge on crazyness and stupidity.

Endless programs refer to melomakarona, kourabiedes and vasilopita – how and where they are made in different parts of our country – and so many other programs – the price, the kilos and the stuffing of the turkey. Nobody questions the festive table, but please let’s not grossly overestimate the importance of the turkey.

But we are not the only victims of this huge confusion of Christmas. The holy and great Father of the Church St. Basil is confused with that well known red-robbed grandfather, a creation of Cola Coca, Santa Claus, who supposedly brings presents at Christmas, according to the tales told to children, who, of course, inherit the confusion in turn. These children will grow with perceptions and images that they will have from their childhood for Christmas, which will be gifts, cards, candy, decorated trees and this man-monstrosity we call Santa Claus.

Finally it should be noted that it is not wrong either to rest or to have a little fun during these days. On the contrary these days are offered for relaxation. They are offered to meet our own and our friends whom we do not meet regularly. But, they are not limited only to rest and fun and thereby forgetting the true meaning of Christmas. It’s a good tradition to exchange gifts with people we love. But there is another tradition, the tradition of our Church. Our Christmas should have a Christ centered character – they should have Christ. We should prepare ourselves spiritually by fasting, by praying, with repentance, with confession, attending church, with charity, with love so that we may show our love to God. Then Christmas will have meaning in our lives.

Let us remember how many people currently are alone, how many are in need of our help and our love.

I hope that this Christmas will be for all of us, the beginning of a good reflection and experience of the true content of these holy days.