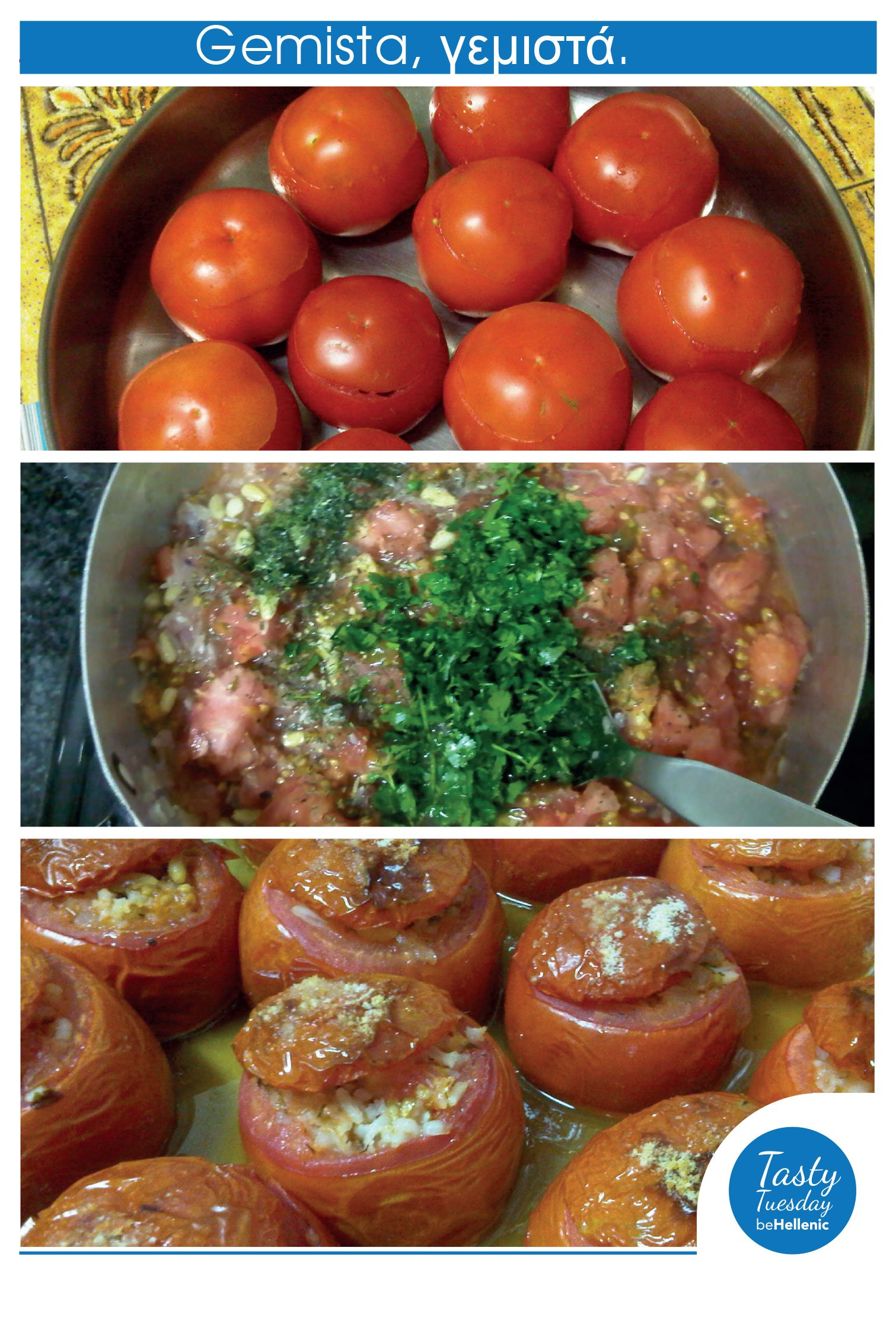 Gemista recipe is actually one of the most popular Greek recipes. In Greece you will hear this dish as yemista, which is written as γεμιστά.

Gemista is the Greek recipe for stuffed tomatoes and other vegetables. It is one of the most popular vegetarian dishes in the summer. Although the predominant English translation of gemista is stuffed tomatoes, in Greece this particular recipe involves much more than tomatoes. Greeks adore their fresh and ripe vegetables and use them as much as they can. Gemista are actually made of stuffed tomatoes, stuffed bell peppers and sometimes zucchinis, eggplants or even stuffed potatoes.

The typical gemista recipe includes stuffed tomatoes, stuffed green bell peppers and sliced potatoes. Gemista is one of the easier and healthier Greek recipes to make at home, although it may seem a little complicated at first. Once you make it and learn the steps, you will see that it’s actually fun to make, especially since it gives you many chances to get playful and improvise.

a pinch of sugar

Cut a 2cm thick slice off the top of each tomato. Do the same with peppers and zucchinis. Scoop out their pulp with a teaspoon into a bowl and set aside.

Heat the olive oil in a medium pan. Add the onion and garlic and cook over a medium heat, until soft but not browned.

Add the tomato pulp to the pan, increase the heat slightly, and simmer vigorously for almost 10 minutes, stirring now and then, until the mixture is thickened. Make sure that there is some juice in the pan still.

Stir in the rice and the dill, cover and leave to cook over a low heat for 10 minutes, until the rice is only half-cooked. Add salt and pepper and a pinch of sugar (it always blends well with fresh tomatoes).

Put the hollowed out tomatoes, peppers and zucchinis into a slightly oiled baking dish and fill with the rice mixture. Replace the tops.

Cut potatoes and arrange them between the stuffed veggies.

Bake in the oven for 35-40 minutes, until the tomatoes and veggies are tender and the rice is cooked through.

Garnish with basil or parsley leaves and serve with feta cheese and bread.

There are many variations of this recipe for gemista. In some areas they add minced meat in the rice and stuff the veggies with this combination. In other areas, they add raisins, because their sweetness is just perfect for the oven baked gemista.

If you try the gemista recipe at home, you can actually make your own version, depending on your preferences. Keep in mind that gemista is a relatively low fat food, and that it’s really tasty the next day as well.

Every Tuesday we will be posting a recipe from a community member for you to try out. If you have an delicious recipe or a special recipe from your yiayia that you’d like to share with us, we will gladly post it on our website. Email us at least two photos, the ingredients list and the step-by-step method to behellenic@gmail.com

It is said “you must be the change you want to see”. I held a vision which saw Pretoria’s community becoming the most beautiful community in South Africa.